I've been catching up on Breaking Bad, and this has me thinking about Prestige Television. (A term I find slightly amusing because it seems to mean, "tv that is actually good, possibly because they are on cable and have a budget big enough to hire quality talent.") Looking over Netflix's recommendations for me, I wonder if it thinks I'm a middle-aged white man. Among my favorite tv shows are Breaking Bad, Justified, and Deadwood. All those shows have good female characters (Justified could make a spinoff called "Margo Martindale Deserved Her Own Show" and I'd be happy. Her character could be an anti-hero I'd love to explore.) but they are definitely primarily focused on the men, and have incredibly insightful explorations of masculinity.

It's arguable whether or not someone like Walter White of Breaking Bad could be replaced with a woman. While any gender could be driven to desperation by illness and love of family, Walt's arrogance, which drives him into the darkest depths, is likely connected with his sense of masculinity. It would be a very different, but still compelling story.

So I thought, what Prestige TV actually centers on at least one female character, but isn't Sex In The City? I'm not really pop culture literate, and my tv viewing is limited to what Netflix and Hulu and the library give me. (I'd be all over Game of Thrones if I got HBO. I think that definitely fits into my category of having women carry an equal share of the story.) Dexter probably qualifies, but it is still called Dexter, not "Deb" or "My Brother's a Serial Killer!" But if you were take Deb out of that show, it would be far weaker for it.
Mad Men probably also qualifies, but it seems like while the women are still vital to the story, Don Draper and his understanding of his masculinity is still the focus. Besides, I watched a few episodes, and though it's clearly brilliant, I couldn't handle the suburban angst. I should probably give it another try one of these days.

In the previews to The Butler, I saw Masters of Sex, which looks promising, (though it's on Showtime. Another one to wait until it hits the library!)
What other shows can I explore?

After having a chocolate milkshake for breakfast (hey, Mom wanted to go to Jack In the Box) I decided I needed to do some walking. So I lugged the camera up to Raab Park at the top of the hill. There's a nature trail that winds it way through the woods up to the park, and I've been roaming it since I was a little kid. Nothing's changed much about it, but in the park itself, they put in a public garden. That made for a lovely photo expedition. 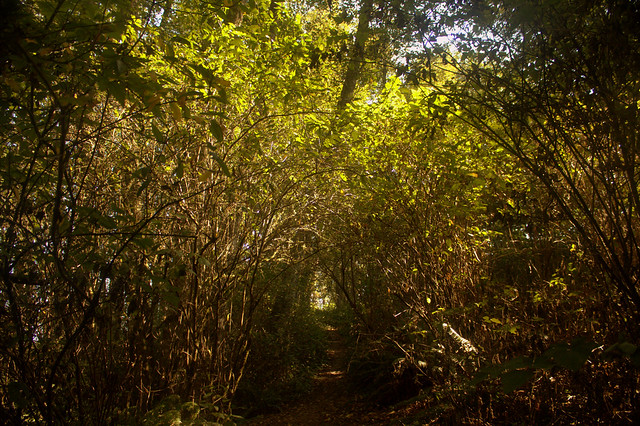 I spent the evening practicing Spanish on Duolingo, and discussing it with my Mom. She's a whiz when it comes to grammar, and despite her frequently saying it's been 40 years, she remembers an awful lot. I appear to have hit upon a subject that bypasses most of the irrational pathways in Mom's head. (and I'm crap at grammar, so I learn stuff from her) I can't do this forever, but I think for three weeks, I'll survive.

We also talked about her desires and the things that bother her about her life, and they really do make sense if you listen right. She's got a lot of standard issues (I'm not a woman if I don't do housework!" "I'm becoming an imbecile!") Just take those standard desires and neuroses that everyone has, and imagine voices telling you that you can't do things to address them. For instance, Mom wants to comb her hair, but the voices tell her that if she does, then she'll get fat. Imagine that, plus being forced into a loop where you have trouble connecting past and present, cause and effect. She said she does sometimes go against the voices and comb her hair. I said, "did you get fat?" She said, "well no but..." The outcome means nothing. She is trapped in the cage of "if you comb your hair you'll get fat."

R.D. Laing is one of the main figures of the "anti-psychiatry" movement, which basically tried to strip mental illness of its stigma, and get us to treat the mentally ill like anyone else. He did a lot of work with the families of schizophrenics (frequently people who desperately wanted their family members to be "fixed") and he found that in talking to the schizophrenic, they made perfect sense if you just listened. I can see what he's talking about, and maybe, in treating my mom more like an equal with reasonable concerns, she'll feel better about herself and her life, and the negative aspects of her schizophrenia will lessen.

This is hard to keep up, though. There's a horrible sense of tragedy talking with her about these things like combing her hair. She is trapped in a state that she can't escape, and I can't help her either. But one of the things I know about being a therapist is that the most important thing they do is simply to listen to people, and be that one person they can trust to take them seriously and withhold all judgement. In refusing to tell someone they need to be "fixed", you defuse that voice in the person's head that keeps telling them that they're broken. If a person can accept that maybe, in fact, they are not irredeemable, and all those weird things about them aren't just there to be hated and avoided, then they can take the first steps towards being a whole, happy person.

So I'm back at the parents' place, destined to be my home for the next three and a half weeks. Dad's going to Spain, to let himself get away from it all. I'm taking care of Mom and bills and whatnot. So look forward to lots of photos, because if there's one thing Mom likes, it's rides, and if there's one thing I like, it's rides to places I can take lots of photos.
I gave notice at work, so in a couple of weeks, I'll have lots of time for said photo road trips. :-)

There's also a movie out right now that we can see together. The Butler. It's about a butler in the White House, and Mom loves the political/historical stuff. She and Dad actually saw part of it yesterday...but the power went out. They got vouchers, but Dad doesn't want to bother seeing the first half of the movie again, so I'll get to go.

Mom's worried that Dad won't come back, but right now, she seems to be in good spirits, and I'm getting a good feeling.

Also, I'll have lots and lots of opportunities to get pictures of the cats.

Since one person liked the idea of a geology post, I made this long and rambly post laden with photos and links.

Okay, geology. I love geology, and took a bunch of classes in college. That said, I am terrible at identifying rocks, but I love them anyway. Geology is as close as we're going to get to a time machine to the far past. It's one age influencing another. The past shapes the present and the present changes the past. A humble stream bed, dry for eons, is all that's needed to divert a river and carve a canyon.

I'm particularly interested in the Channeled Scablands, aka most of Eastern Washington. They were carved by massive floods into layer after layer of flood basalt, and are pretty much as close as we'll get to certain Martian terrains here on earth. (1)

My favorite part is Glacial Lake Missoula, which was created when an ice age glacier dammed the Clark Fork River and flooded much of Western Montana's steep valleys. I like it because I like imagining myself underneath this huge, cold lake filled with icebergs whenever I visit my grandparents. I like imagining the whole system breathing as the water rises, breaks the ice dam, and pours out, rushing through the plains, pauses to pond behind the Wallula Gap, then rush through the gap and the Columbia Gorge, pause again in the Willamette Valley, and then rush on to the sea. Then the glacier kept moving forward, and the cycle started again.
( Collapse )

First, a couple flowers from around the neighborhood in a quick attempt to stick to my goal of taking pictures every weekend, before said busy weekend ended. 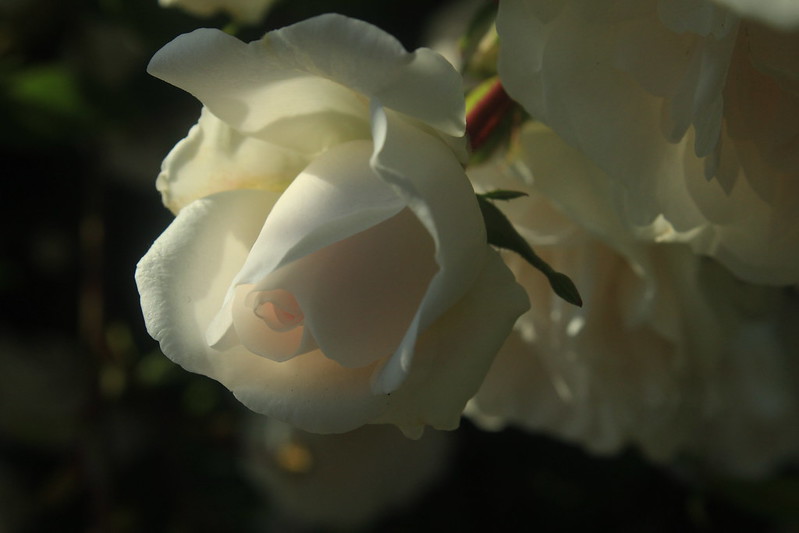 So I've been needing to get out town. Desperately. Turns out, my attempt to do so was a near perfect success. I rented a car (a bright red Mazda 2, as it happens. No free upgrade this time, though the clerk did try to get me into an SUV) and headed to Eastern Washington. Not only did I need to get out of town, I needed to get into a totally different biome.
There's lots more pictures over on Flickr. I took about 500, and uploaded about 60.

Some new critters at the zoo: lion cubs, sloth bear cubs, and small-toed otters. The sloth bear cubs were literally never still, but constantly chewing on logs, climbing trees, and wrestling. The otters are just freaking adorable. You can't tell how small they are, but they're about the size of a cat, and they squeak. There's more over on Flickr. 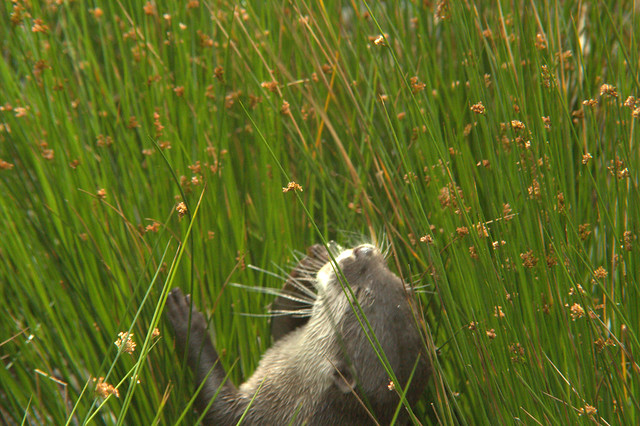 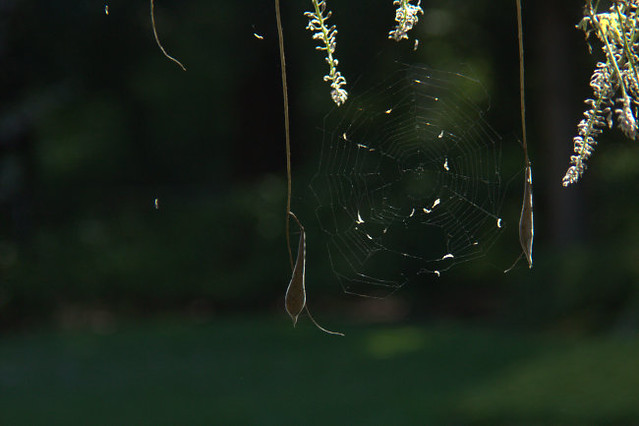 Dad came over today, and we went out to Foster Island at the Arboretum to watch the boat parade. I used my telephoto lens, which isn't the greatest for this sort of thing, but I got some nice shots. It started with the rowing crews. 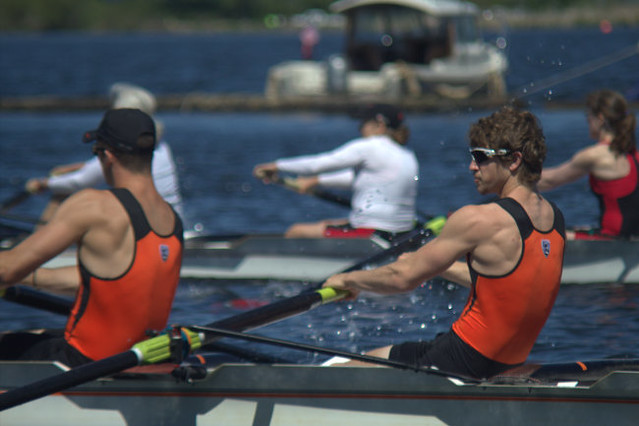